I love Halloween. Do you?

I love the crisp air of Fall. The leaves crunching underfoot. The sounds of kids laughing. The excitement over choosing a costume - and then executing it perfectly. If we're lucky, the smells of fireplaces burning and, of course, of candy.

All of my BPAL Halloweenies are "vintage" because I just couldn't swing a purchase this Fall - and that's majorly disappointing because I love Love LOVE BPAL Halloween. Sigh...

Anyway, vintage is good, too. And The Lab often re-releases scents of the same name so you can collect various vintages - like wine!

Today, there's no better place to start than SPOOKY (a spooky scent for a spooky day!). This is BPAL fan fave -a scent that many clamor for when it's released. But does it live up to the hype?

From what I can gather, Spooky was originally released in 2003. It went over well for many - love at first sniff! BPAL fans waited for a reappearance... They got one in 2005, then again in 2009 when the scent was "resurrected" for BPAL's anniversary celebration. I am reviewing the 2009 version today and can't speak to the difference between it and the earlier version - if there is one.

OK. I have to admit: that sounds weird. "Slightly silly". Yup. But it's also delightful, and my choice for today.

I never recommend sniffing straight from the bottle when dealing with --- well, with any scent, but especially BPAL. The genius of the scents usually needs skin to help it unfold. This bottle is all peppermint. A good start, but it doesn't really tell the whole story. 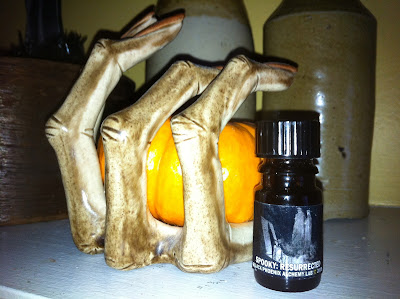 While peppermint is the first thing you smell when this oil hits your skin, it's not sharp or sweet. It's quite herbal, actually, like crushing the leaf of a peppermint plant between your fingers.

Then, moments later, a beautiful sweet and boozy smell swirls around, as if you were sucking on a butter rum candy when sniffing that peppermint plant. It sounds strange. It is. But it's also really, really beautiful. These odd combinations swirl and become a surprising melange of yum. Yes, you may quote me on that - and feel free to borrow that phrase. Let's make it a new thing, mkay?

Shortly, the coconut comes into play. The result, on my skin at least, is a strange cilantro-like smell! I happen to love cilantro, so this is great. The perfume actually wavers a bit, like a flame in a slow breeze. It changes softly from this cilantro feeling to fleshy coconut to a light peppermint, then back again to cilantro. After the initial few minutes, for me the butter rum is gone. I enjoyed it greatly while it was there, but don't miss it. The flickering candle flame is enough for me.


From the reviews I've read, most folks seem to concur with my description - well, maybe not the cilantro thing, but the peppermint-coconut description. Some people associate a little more strongly with Thin Mints (of Girl Scout cookie fame). What I noticed most clearly, though, is that this is one of those scents that must seems to be highly influenced by skin chemistry. It seems to be a love it or hate it scent with some complaining of the smell of plastic or suntan lotion gone bad. The rest are swooning.
I, for one, love Spooky.
I love Halloween. Do you?


What are you wearing for Halloween? Do you like cilantro? Which are your favorite Girl Scout cookies? Are you dressing up for Halloween? Are you hyped up on sugar? Let me know in the comments!