Neela Vermeire's Mohur will blow you away! (perfume review)


For those of you do not know about Neela Vermeire's perfumes, you're in for a treat. Neela is fragrance fan who, in 2012, launched her own house. She contracted none other than Bertrand Duchaufour (seems to be a smart trend among new houses!) to bring to life her idea: Discover Your India. Together, they urge you to sample from India's past through to its future, in the French perfume style. Sample the Vedic period in Trayee, experience the Mogul-British Raj through Mohur, and finally land in Modern India with Bombay Bling. All three scents have been well-received by perfumistas and Noses in the Know alike. Today, we're going to discuss Mohur!

One of the incredibly intelligent things the Neela Vermeire Creations line does (aside from having beautifully-made scents) is offer not only a sample collection, but also a "discovery set" which includes 10ml of each scent (only $118.55). Genius. 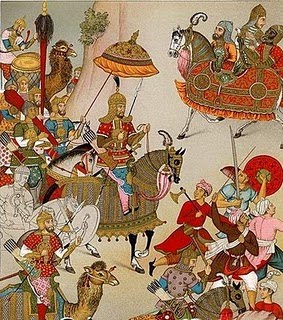 Here's a lovely bit on the inspiration of this scent, written by Victoria of Bois de Jasmin, and since I couldn't explain it better, I won't:

"Mohur takes its name from a gold coin minted during the Mogul era in Indian history. It is influenced by the story of the empress Nur Jahan, who not-so-secretly became the power behind the throne of her opium-addicted second husband.  After her husband’s death, Nur Jahan took up the art of perfumery while under what amounted to a house arrest.  Although the perfumes Nur Jahan created are lost to history, the story is not and it is this that Neela Vermeire has taken as inspiration."

Mohur kicks off (most of the time) with a swirl of dry, rooty spice. Specifically, I get carrot and pepper and coriander and orris. It's invigorating.

Shortly, and it doesn't take long, the spicy winds settle down and in that respite blooms a beautiful french perfume full of the sweetest, dewiest rose note I've smelled in awhile. That rose is layered over jasmine and - believe it or not - almond milk. This creates the occasional impression of one of my favorite desserts of all time, carrot halwa or "Gajar ka halwa", a cardamom + carrot + almond + milk mixture that I can never say "no" to.

Periodically, the winds kick back up and Mohur's roses become a garden with the whole rose bush - roots and all.

Slowly, as the rose blows in and out, the grassiness and spices are gone and a base of oud (oh-so-softly) and vanilla-tinged leather is built underneath my feet. Rose petals settle slowly onto the ground, fluttering gently as the fall.

Mohur doesn't sit still often. The roses are ever present, but their dance partners change like the wind. I get different Mohurs depending on the day and on the way I apply (dab vs. spray). This does not at all discourage me from wearing it. Quite the opposite, in fact. It makes me drawn to Mohur to see which personality the winds will bring me today!

Let me call your attention back to the Luckyscent description of Mohur:


"If Patou had been Indian,
this would have been Joy."

I think not only is this quotation right on the nose, but it's also very descriptive and apt of this whole line. Neela Vermeire Creations, through the eyes and noses of Neela and perfumer Bertrand Duchaufour, is the perfect marriage of classic French perfumery and traditional Indian perfumery. This, I think, would make Noor Jahan very, very happy.

Tell me: Now that I've talked about all three of NVC's perfumes,
which one is YOUR India?
Or which one intrigues you the most, if you haven't tried them yet?


Buy Mohur and the other


the NVC website, Luckyscent,
and through the retailers listed here.

BTW, wouldn't you love to wear this amazing bindi?