Ormonde Woman, the Devil's Wife, and the Missing Freak...

Have you ever heard of Lilith? She's thought by some to be the Devil's wife, or maybe his consort. She was Adam's first wife, but by refusing to be meekly led by him -after all, they were created at the same time, from the same dust - she ended up in a world of trouble. (Adam later was blessed with Eve, who was clearly inferior and made from his rib and happy with her lot as subservient wife.) Lilith was punished for her disobedience. She was left to deal with the evil spirits and the fallen angels. She became the Lady of Sorrows and her cries are carried by wind and storms.

She's considered both innocent and evil, originally good and then oh-so-bad, the one who guards children under 8 days of age because she cannot have her own human offspring. She lies with demons.  She's a seducer. A harlot.  A winged woman. A black cat. A screech owl. Beautiful evil.
If I were to imagine a scent for Lilith, it would balance her original, pure nature and the current circumstances she embodies. Green and woody notes would represent her roots in Eden. Spices would represent her place in hell. The perfume would need to be beautiful and natural and strange...
Ormonde Woman
That scent - Lilith's perfume -  just may be the beautifully bizarre Ormonde Woman, created by Linda Pilkington for her line Ormonde Jayne. 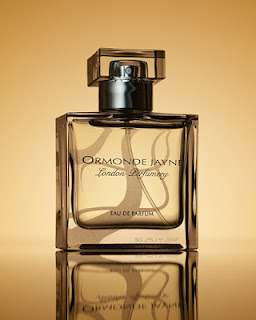 I have long wanted to try the scents from this most cherished of perfume lines. Fragrance lovers and perfume bloggers and the otherwise scent-addled rave about Ormonde Jayne. Naturally, that's going to make a gal curious!

I chose to start my Ormonde Jayne adventures with Ormonde Woman. After all, that's where Linda Plinkington started. It's one of her first two scents, the other being a masculine called Ormonde Man.

When I placed my sample order, the only thing I remembered about this perfume was that it was "difficult" and "challenging". I like that in a scent!

Ormonde Woman is not a perfume. It is perhaps best described as a potion. It seems alive. It's both cold and warm. It's full of movement and yet totally calm. It's soothing and it's invigorating. It's natural and it's completely unnatural. I'm fairly certain it is full of magic.
It is amazing to me how this perfume comes across to so many people as being the stuff of fairy tales (witness Olfactoria's take here, The Non-Blonde's here, and Perfumeshrine's here). Ormonde Woman is, to me, the embodiment of a woodland forest. It encompasses the dark shadows at the base of the trees and under the fields of ferns. It also presents the dappled light that shines on the mulched path through the spotted leaves above.
Ormonde Woman is woody and green and lovely. The grassy notes are shimmering and bright. The vetiver is dry and rooty. The jasmine is sweet and clear. The amber is delicate and soft. The cedar is sturdy and rich (and deliciously played with a soft hand).
Hemlock, an evergreen, is rarely used in perfume and probably never in these amounts. It is probably what is responsible for the nearly lemon-like flashes in the top notes of this perfume. At the same time, I think this note is also what gives Ormonde Woman a sense of being a deep, dark green. The spices add an earthiness to the blend rather than burning fire. The coriander and its other form, cardamom, help this scent seem familiar and utterly strange all at the same time.
From afar, there is a powdery nuance to Ormonde Woman. Think green powder, darker than - but not dissimilar to - Chanel No. 19's. It's missing (or at least much more subdued) when you come closer, but adds a lovely dusting of innocence to the scent's sillage. I think Lilith would use that to her advantage, luring the naive men she spots into her web.
This innocence is also presented in the violet note that wends its way through the development of the scent. I have come to learn that I love violet in a perfume, but here it's not quite as sweetly and femininely portrayed as usual. Or maybe it is, but the deeper counterpoints play against it in a novel way.
The sandalwood at the base of the scent is actually apparent throughout, and adds a nuance of creamy skin to the scent. What's not to like there? I think Lilith would agree.
Ormonde Woman is at once darkly mysterious and calmly soothing. It is darkest green, beautiful, and tempting. It's not sexy, it's sensual. Natural. And strange. It reassures as it unsettles. It is indeed a fairy tale forest. It is perfect for Lilith, the caretaker of newborns, the taker of lives, the mother of demons, the consort to the devil.
Though this perfume carries "Woman" in its name, and even though I think it's perhaps the fluid personification of Lilith, Mistress of Darkness, I bet is smells amazing on a man!
Note: PerfumeSmellingThings also thinks Lilith would be a fan of Ormonde Woman. Read this.
Freak Another scent one would have believed "a natural" for Lilith, bride of Satan and mother of his demon children, would be Freak, by British makeup brand Illamasqua. The line is famous for their cutting edge artists, intense pigments, and amazing, slightly subversive and totally inspiring imagery.
This brand, icon of certain subcultures, called their first perfume Freak.  The name seemed perfect. Freak is housed in a bottle that's forward-leaning, Tower of Pisa style. It features a snail eternally crawling up the side of the shiny black mountain.
When Illamasqua announced they'd be releasing a perfume, when the first images came out and when the notes were shared, many of us were thrilled! The scent, I assumed, would be completely counterculture. Crazy. Ground-breaking. Unusual. Inventive. Underground. Dark. An enigma. A little scary. A lot beautiful. Just like everything else Illamasqua touches.
Take a look at the description of Freak's notes: 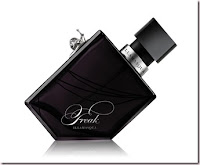 Top NotesBlack Davana, Opium Flower and Belladonna bewitch the senses into uncontrollable lust and passionHeart NotesPoison Hemlock, Datura and Queen of the Night blossom, caress and kissBase NotesAromas of Frankincense, Oud and Myrrh, addictively mesmerises and captures the senses

Look! It's got poison hemlock, which also featured in Ormonde Woman!
Sadly, I don't think Lilith would be a fan. I know I'm not. Sure, it's a pretty scent. But there's nothing surprising, subversive, or even dark about it. It's a scent that I could see almost any woman wearing to almost any event.
I think Freak if works for Illamasqua, and by all accounts it's selling well, it's going to be because so many young women and men are only familiar with scents from their department stores. Sure, Freak is dark and moody and sexy when compared to fruity pink juices or cool blue colognes.
For those of us with a broader familiarity with scents, it's really not all that creative. Pretty, yes. Demonic and mysterious --- not so much. It's round and dark purple and somewhat fruity. It's got no bite, though. This freak has no teeth. It goes round and round, like the spirals on that snail shell, but never really gets to a point that pulls it up and above the crowd, which is what Illamasqua is usually so good at doing.
I may actually track down a bottle... eventually. Not because it's so groundbreaking or evil, but because it's pretty and versatile and that damn snail is adorable!
Thoughts
It's so odd... I expected to fall in love with Freak, but I did not. It barely inspires me to write about it. Then I met Ormonde Woman, a scent I had expected to have to struggle with to understand. Immediately it not only inspired me, but made me love it. It will definitely be added to my scent library, and worn often I expect. Ormonde Woman is everything I expected from Freak. Everything Freak is not. 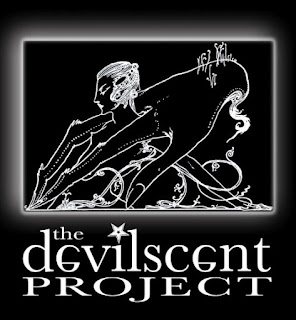 All of this evil talk has me itching to share some news!
I'll be participating in a devilish project soon. Devilscent will feature a handful of fiendish perfumers, a gaggle of demonic bloggers, one diabolical writer, and, of course, perfume!
If Faust were a woman with an attitude problem and six strings of accumulated madness...what deal would she make with the Devil?
Follow along to learn what Quantum Demonology is. Like the Devil's Facebook page to stay in the loop!
Along the way, you may find out what, indeed, Lilith smells like - if you dare. And learn what inspires her wrath! You may meet her husband, if you haven't already. You may find yourself. You will definitely be entertained...
You can read a little more about The Devilscent Project here thanks to our intrepid leader. And stay tuned! We're only just now stepping into the darkness. Who knows what dastardly shenanigans will transpire?!
So tell me:
What would Lilith smell like, do you think? And her husband?
Are you a fan of Freak?
Do you love the fairy tale that is Ormonde Woman, or is it more of a horror story for you?
And are you ready for Devilscent?