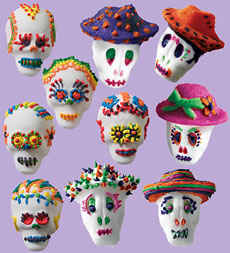 Yesterday, we looked at Black Phoenix Alchemy Lab's Spooky - a suitable choice for a spooky day. Today, what choice do we have but to talk about Sugar Skull? It is the Day of the Dead (Dia de los Muertos), isn't it?

About Sugar Skulls
Sugar skulls are used in the celebrations of this holiday, Dia de los Muertos, in Mexico. They were originally representational, meant to resemble a deceased friend or family member, as a tribute to that person. Indeed, they may still be used that way today, but also have become a symbol for the holiday.

Mexican sugar skulls are colorful, as is the holiday itself. Handmade sugar skulls are ornate and time-consuming to make, though most are machine-made now. The pressed sugar is shaped like a skull and icing is used to decorate it.

Read more about The Day of the Dead on Simply Pretty.

Sugar Skull perfume oil
It's clear what the inspiration for this perfume is. But how is it carried off? Here's the BPAL description of the scent:

SUGAR SKULL
Vibrant with the joy and sweetness of life in death! A blend of five sugars, lightly dusted with candied fruits.

My fear, when I first sampled this scent last year, was that it was going to be a tooth-achingly sweet sugar bomb. How could it not be? I imagined Pink Sugar (Aquolina). I do not like Pink Sugar. In fact, Pink Sugar sets said teeth on edge like little else can. I do not "do" sugar scents well.
But I'm an avid Day of the Dead fan and Beth Barrial, the perfumer at BPAL, is a very talented woman (though she has made some scents too sugary for me before.). I boldly opened the vial.
Surprisingly, Sugar Skull is not a cavity-creator. How can 5 sugars (five!) be blended with fruit and come out without smelling sickeningly sweet? I don't have any idea. Ask Beth.
On me, Sugar Skull is a warm sugar. Soft, maybe toasted or perhaps melted like the sugar on top of a creme brulee. I thought maybe it smelled of brown sugar, but after sticking my nose in my counter canisters, I can't say it resembles any sugar I have. See the research I do for these reviews? On me, this sugar isn't plastic-y or chemical-y.
There's a soft but not shrill fruit here, too. I am thinking maybe plum? It's round and full, but not overt. Hard to distinguish what it is.

Whatever the combination of sugars and fruits, this is a warming and reassuring scent that is not overly sweet or sticky. On me, neither element, fruit or sugar, is plastic-y or chemical-y.  I really, really love it. I wear it often when I'm cold, depressed, or just feeling alone.
From what I understand, the 2010 version of Sugar Skull  (the one I own) may be a little less sweet than earlier versions. If you can give input on that, let me know in the comments! All I know is I won't hesitate to purchase Sugar Skull again when it comes back.
This year, The Lab didn't release Sugar Skull. Instead, these are their 2011 Day of the Dead-inspired perfume oils:

MICTECACIHUATL 2011
Known as the Mistress of Bones and the Lady of the Dead, she is the Queen of Mictlan, the Aztec Underworld, who still presides over today's Day of the Dead rituals. Sometimes known now as La Huesuda, she brings peace and joy to the spirits of the deceased, and blesses the living who do honor to those who have passed before them.
Copal, precious woods, South American spices, agave nectar, cigar tobacco, and roses.