Shalimar - the pink one. (A perfume review) 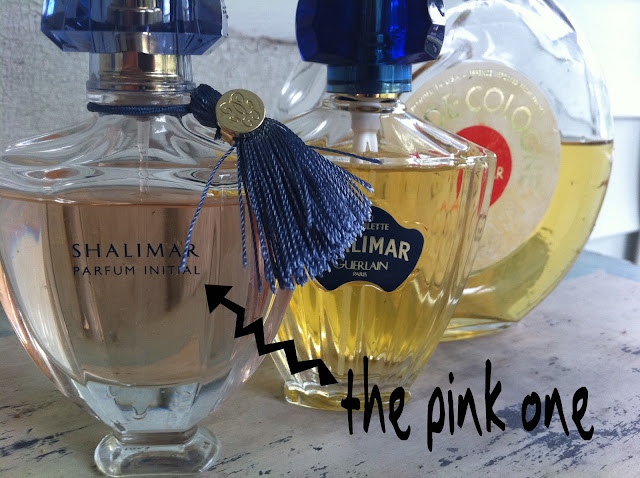 I've gotta be honest with you: this perfume review has been hard to write. It's not that Shalimar Parfum Initial is terrible, which is why I usually have trouble writing a review. It's not really complicated, either, which often makes reviewing a challenge.

In fact, I really like Shalimar PI! It should be easy to write this puppy up! 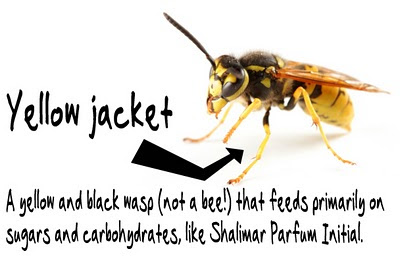 So I settled down at the park this morning, while Lulu played. That lasted 3 minutes. Literally. My writing time and the kid's slide time were ruined by some nasty yellow jackets. They wouldn't leave us alone!! A ringing endorsement for Shalimar PI, though, right?

Anyway, I was thinking about how to describe Shalimar Parfum Initial and then I started thinking of that kid from grade school. You probably had one like her in your school. She had an older sister who was going through school just a few grades ahead. The problem, if you want to call it that, was that the big sister was good at everything. And I do mean everything. Honor Roll. Soccer star. Musical prodigy. She could even glue felt without making a mess. She had it all!

So when the younger sister hit the school, all of the teachers knew what to expect: excellence! Only... having an older sister, or cousin, or father, or grandmother who is good at something doesn't mean we are. Nowadays we, I hope, realize that everyone learns differently. Everyone has different talents and different challenges. That poor little sister had a lot to live up to, and sometimes she did - but sometimes she didn't. And that's ok. She was pretty awesome and a lot of fun! 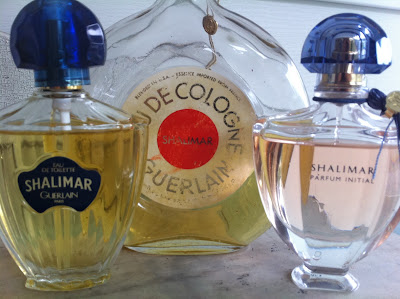 Which brings us back to Shalimar Parfum Initial. As the name suggests, it's meant to be a version of Guerlain's famous Shalimar.  Talk about living up to your big sister! First of all, she's quite a bit older. She launched in 1925. And she's not just successful - she's iconic. Love her or hate her, she's a legend!

As a side note, Shalimar also outshines her older brother! Jicky, which I actually love even more than Shalimar, was created in 1889 by Aimé Guerlain. It was a unisex scent, as were they all at the time, possibly named after Aimé's uncle, Jacques, who went by Jicky. This fabulous perfume opens with bergamot, lemon and some famously gorgeous lavender. Luscious rose and jasmine melt into orris and some vetiver. It's the base that's most delicious, though, in my opinion. Civet is the famous ingredient, and it's joined by a leathery, ambery, somewhat smoky vanilla-tinged sexiness. Delicious!

Supposedly, Jacques Guerlain was playing around with a new synthetic vanilla, ethyl vanillin, and dumped some into Jicky. Not just some - a lot. An "overdose". And thus Shalimar was born (maybe, if the story is true). It's still smooth, ambery, sensual goodness, like Jicky, but sweeter, with less herbaceous bite.

Shalimar is often considered "an old lady perfume". Oh man, that kills me to write. How?! It's smooth, it's sexy, it's a little raunchy (thank you civet!). I suspect it's not that it's old-fashioned, rather it just doesn't fit in with the jeans and t-shirts in current fashion. Shame, since it's so damn good! And on a personal note, I wear it with jeans, thankyouverymuch. But the truth is, Shalimar is A Big Perfume. It's not terribly subtle, nor is it going to melt into your skin.

So, what do the kids wear these days? Pink pepper;  fruity celeb scents; fruitchoulis - if most bloggers are to be believed. And someone is wearing those scents, because they're the top sellers at the moment. Classic perfumes are often revamped or "updated" to give them a fighting chance in the current market. And that, folks is how Shalimar Parfum Initial was born. It's meant to be a training bra of sorts, meant to bridge young women into the land of grown-up lingerie, er... I mean perfume. I kind of got lost in my own metaphor there, but I think you catch my drift. Plus, it's pink, so the kids will love it (or so say the marketing geniuses). 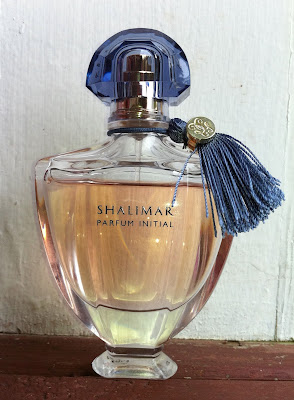 This pink Shalimar isn't the first Shalimar flanker (like a tv sitcom spin-off), but it's the only one I have tried. I do have a somewhat vintage Shalimar edt (it's not current - probably from the 90's) and a more vintage Shalimar edc (from the 70's according to this source, which is awesome, btw). And now Shalimar Parfum Initial.

Here's the official notes list for Parfum Initial: created of citruses, green notes, flowers, woody accords and oriental scents. Starting from citruses, the composition adds zest of bergamot and orange. Rose flowers and jasmine enjoy embrace of woody accords of vetiver and patchouli, while oriental notes of vanilla, white musk and luscious tonka give seductive warmth to the whole composition. Green notes provide a fresher tone to the composition.

What do I smell? A light and sparkly citrus opening, with fruity facets. Nice. Pretty. Fresh. Youthful, but not childish or bratty. There's iris (not orris) and some lovely woodiness. No civet, here. Instead you'll find patchouli - pretty stuff, not head-shoppy or sharp. The base is pretty signature Guerlain fare: there's a little extra musk with that vanilla and tonka, but it's recognizably Guerlain. I have all three of my Shalimars on right now, and the Parfum Initial has a drydown that's definitely like my Shalimar edt, just sweeter and softer and a little lighter. The more vintage edc, though is a further branch on the family tree. It's definitely wafting that civet that neither of the newer perfumes are putting out, but still has that vanilla-tonka yumminess that makes me want to sniff it constantly. 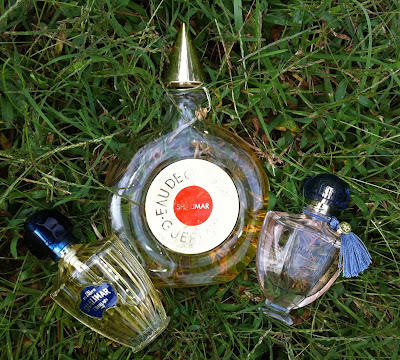 No matter what anyone says, Parfum Initial is somewhat reminiscent of the original Shalimar. It's got that decadent, almost foody aspect to it. It's not quite as sticky and nowhere near as dirty, but it's definitely an oriental fragrance. Is it the same? No. Not at all. The younger sister is a little more green and has a lovely softness. Her older sister had bolder characteristics and was a little more Knowing if you catch my drift.

Just as that girl from my gradeschool was very different from her sister in many, many ways, Parfum Initial is not really similar to Shalimar at first glance. Look at them a little more closely though, and you'll see the similarities, just as you could eventually notice that both sisters had the same freckles and sense of humor. Sisters, but different.

I really wish Guerlain hadn't named this Shalimar. I get it. I understand why they want to draw younger folk toward their products. It's important and it's probably quite challenging. After all, Parfum Initial smells nothing like Justin Beiber's perfume, nor does it smell like those cute little L.A.M.B. perfumes Gwen Stefani puts out, or really any of the perfumes you'll smell in your local high school. But it doesn't really smell enough  like Shalimar, either - at least not enough to be considered a flanker. Then again, it is a great gateway into the Guerlain signature drydown, AKA "Guerlainade". And once the kids are hooked, watch out!

When taken on her own merit and not compared to her big sister, Parfum Initial is really, really good. Delicious! I can't stop wearing it, and it even worked well in the hot weather where the original Shalimar was stifling and overly-sticky. I do love a multi-seasonal oriental fragrance! Try it. You might like it. Just don't compare her to her big sister - it's not fair.


Disclosure: I bought this with my own money. And I'd do it again!