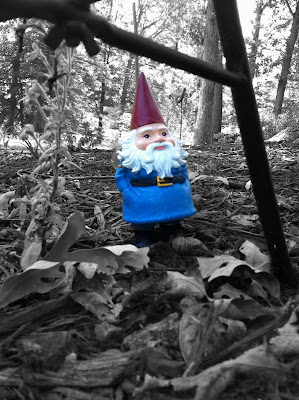 I met this little fella the other day, in a garden on the edge of a thick patch of woods. He had a faraway look in his eye, and I wondered what he was thinking. He was supposed to be tending his garden, but as you can see his thoughts seemed to have run away with him.


Watching how serene he was, how lovely and quiet his garden seemed, I began to daydream. What does this man's home look like? Where does he hang his tall, red hat every night? Is he partial to blue smocks, or does he have other favorites? Is there a Mrs. Gnome waiting with dinner ? Do little black boots sit next to his on the hearth?


As I imagined his life, I saw the details in my mind. Sensed them. I could feel the rough timber of his kitchen table. I could hear the crackle of the fire over which a pot of mushroom stew bubbled. I mentally ran my finger over the twig beams of the roof and felt the rough stone floor with my bare feet.

Then came the smells. I came to get a scents of the place, if you will. At first, everything just smelled sharp and green. Galbanum and fir mingle with a bit of lavender. Where was that lavender? Oh! Hanging in the corner of the room, drying! Once I wrapped my mind and nose around the place, the sharpness of those first scents retreats. I become aware of the rose petals in a little bowl, the recognizable scent wafting up from the cedar chair.

Absentmindedly, I poke a stick into the glowing embers under the soup. A spark flashes briefly. I smell the fires that were lit here before - a dash of incense lingering behind. The whole places is alive- such large smells for such a small home! But the smells aren't overwhelming. They are gentle. Peaceful. Soothing, but still wild. There are roots and mosses behind it all, mingled with something smooth cozy that just smells like home. And above it all, the lavender, now soft and pretty and not at all sharp.


A noise makes me start. I find myself again on the edge of the woods. As I try to shake off the daydream (it was a dream, wasn't it?) I realize the little man in the red cap is gone. I never even asked his name...