I'm a little insane. Despite being viciously allergic to lilacs, I look forward to their blooms every Spring. And as soon as I see them, I pace impatiently until they open up and release their scent. Maybe pacing for a few days, which is exhausting, explains what happens next. Maybe not.

As soon as possible, once the sweet and high-pitched scent of lilac is released, I stick my face in the blooms and inhale repeatedly. Dizzy from the smell, I stagger towards the house with armsful of blooms as the histamines start their assault. It's a blissful mess of a week. I should a) have my head examined, b) invest in Kleenex, and c) get more vases - it's almost lilac season!

It might be smarter to invest in lilac perfumes. I never said I was smart. However, I have now identified a(nother) lilac-prominent scent to add to my perfume wardrobe. The first was Lilac, by Elizabeth W, and I'll review it another time. Today, I want to discuss En Passant, one of the Editions de Parfums Frederic Malle.

When I first inhale En Passant, I am surprised by the wet, fresh lilac scent. It's not so much dew-laden blooms as lilacs blooming near a fountain.

As the initial indolic 1 blast softens, a fresh and light aspect merges with the lilacs and water. While I don't smell straight-up cucumber, learning that the note is present makes me nod my head in understanding. This is no fake-y cucumber à la a cheap body lotion, though. It reminds me more of the ice cold "cucumber water" served at a local spa. Recipe: slices of cucumber get tossed in water; pour. Simple, cool, refreshing, and light.

One of my main complaints with other lilac scents, aside from an overly synthetic and plastic scent, is a cloying, overbearing sweetness. There's none of that here thanks in part to the cucumber and water notes, but also to the "wheat note".

Malle's staff told scent critic Chandler Burr that this perfume was "born in the instant that Giacobetti somewhere on a street in her native Italy passed a bakery and a florist and got pastry, flowers, and street all at once." 2 True or not, it explains the wheat.


Some people smell bread in En Passant. I do not. However, I do feel that the lilac, water and cucumber is somewhat anchored by a slightly yeasty note that both expands and holds the composition. I'm currently imagining a lilac balloon tied to a weight. It's kind of like that: the scent is weighted slightly bit still allowed to move and drift, nearly weightless.

After the initial blast, the lilac seems as almost distant. To me, it's more like smelling the blooms through sheers in a window or from across the room. Distinct, but not in-yer-face. As much as I love lilacs, I'm OK with that distance. The heady smell of lilacs can tire a nose quickly. Here, it wafts gently, allowing you to smell it during the entire progression of the perfume.


En Passant is fairly linear, but multifaceted. In other words, it has different nuances but doesn't  evolve or change much over time.

Unfortunately, a balloon eventually loses it's buoyancy, and blooms fade and die. En Passant doesn't droop or wilt, but instead softly fades off and away, as if the balloon were released from its anchor. Sadly, this happens too soon - about 2 1/2 or 3 hours after application. It's worth reapplying, in my book, and I look forward to adding this unique perfume to my collection permanently.

Until then, you can find me pacing in front of the lilac bushes. 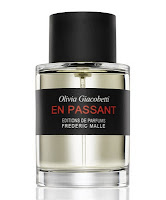 Final word: Spring in a bottle.