Here's how I could do this whole review, were I succinct and a little more artsy...

Le Mimosa is "a soliflore". To save you other Newbies some Google Time, I've done some legwork. A soliflore focuses on a single flower. There's a catch, though. In the words of the esteemable Angela of Now Smell This, a "soliflore is a perfumer's vision, an interpretation of the scent of a flower". [1]

In the much less eloquent words of yours truly, a soliflore is a flower or bloom as seen sniffed through the eyes nose of a perfumer. Some rose soliflores play up the honeyed nuances of the bloom, others the spice, while others include green stemmy aspects. It can be said that when it comes to perfumery a rose is a rose is a rose but all roses are not created equal... or something.

I don't know too much about mimosa. I've heard of the drink, which is a one part champagne, one part orange juice cocktail. And we have invasive trees here in Virginia called "Mimosas" which look like the these:


But I'm pretty sure they're also called "silk trees" and aren't what the Annick Goutal folk were referencing. I'm certain they were after the big golden fluffies in the other pictures - a harbinger of Spring to folks all over the world [2] and a cousin to the ones near my home [3].

What does the yellow fluffy mimosa smell like? I can't speak from personal experience, because even though I think the fernlike fronds and happy puffball blooms are pretty, around here silk trees are usually found along roads and lining ditches, earning the classification as  "junk trees" according to my husband. And they probably don't smell like the yellow ones, anyway. Sigh.

We already know putting words to scents is tricky business. What little I've been able to find describing the scent of mimosa tends to involve these words: sweet; slightly fruity; honey; mango; cucumber. [4]
By the way, can we all say "mango smoothie"? Um, yum!

I suppose what's important is what Camille Goutal and Isabelle Doyen think a mimosa smells like, since they created this perfume. Here's what they have to say:

Built around a mimosa absolute from Grasse, with sweet floral hues punctuated by soft green, Florentine iris and anise are added to enhance the flower's natural facets with their powdery strength. At the heart of the composition a peach, with sweet undertones of sun-drenched flesh, using its fruity curves as though to adorn the mimosa with unprecedented radiance. Then the white musk makes its entrance, draped over a light sandalwood frame, to carefully wrap the wake of this soft single flower perfume in a silky, milky and deliciously addictive blanket.

What do I think it smells like? Heaven! To elaborate: a peachy honeyed musk. For you synesthetics: I don't picture yellow when I try to pin a color association on this perfume. Instead, I see the color of the flesh of a ripe mango. And there just may be a mango facet to this scent (just sayin').


While a soliflore, Le Mimosa is neither linear nor "one-note". It's as complex as any bloom, and shows several faces as the fragrance develops.


I do detect a slight flirtation with anise in the opening, and if you're an anise-phobe like myself please know that it's amazingly delightful here: soft, necessary, fleeting. 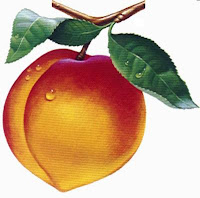 Is this a peach scent? No. While there is peach present, I'd say this perfume is peach-toned. Just as a peachy streak enhances a gorgeous sunset, but a sunset isn't only orange, so this perfume contains peach without being a peachy perfume. Sometimes I think I only make sense to myself, but what I'm getting at is the peachy tones enhance the scent without for even one millisecond resembling an artificial peach perfume.

Do I pick up the iris, though? Not really. Maybe a tad as the heart folds softly into the drydown. Speaking of the drydown, can we talk about how lovely a softly powdered & musky, vanilla'd sandalwood sounds?! Delish.

On me, the peach honey phase is not long enough, but lasts a good hour or two. The drydown is still perceptible on my skin eons later (like, the next morning). My dab-on sample doesn't have a lot of presence or sillage; not sure how spraying would change this, but I suspect it might. If I remember, once I buy my bottle(s) I'll update you.


If I were asked to describe the scent via nose picture, I'd be concocting some visual metaphor involving kittens and peaches and the soft smell of a baby's head. But that would be weird. Instead I'll do a word association: soft; cuddly; fresh; happy; yellow velvet; fluffy; comforting; delicious; soothing; Spring.

In case you're looking for me this Spring and early Summer, you'll find me climbing mimosa trees along the highway, pressing my nose into the fluffy blooms and wearing Annick Goutal's Le Mimosa - just so ya know. 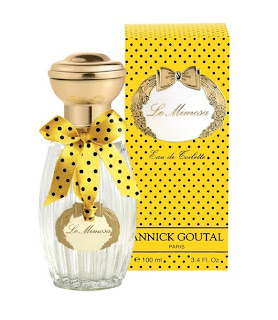 [1] I was going to go through this whole "each artist paints a subject differently" thing, but since Now Smell This beat me to it, read the metaphor here. (warning: all links to other blogs may inspire lemmings).
[2] By "all over the world" I mean "lotsa places". I'm not interested in the specifics because research is difficult with my nose stuck to my wrist.
[3] Several sources I found vaguely state that there are over 400 species of mimosa.
[4] Loved this link which answers the question "what does mimosa smell like" with the answer saying, essentially, "I don't know, but probably good." Ah, the internet...